Check back here often to catch up on #DeathPenaltyFail

New film with death row exoneree: watch and help us spread the word 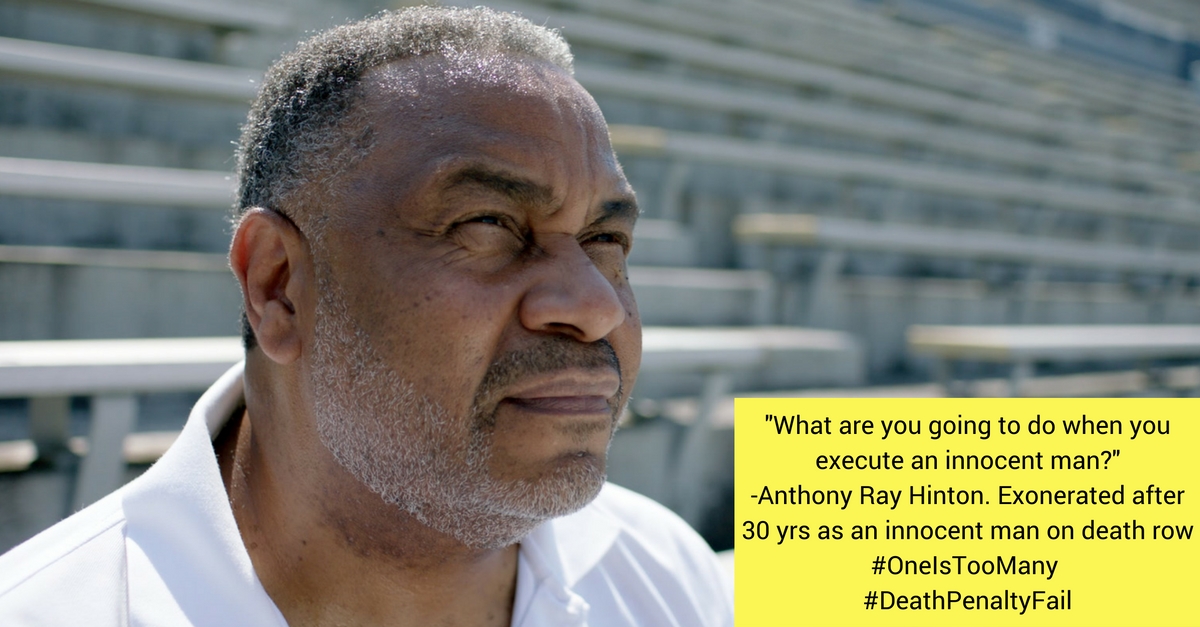 When working to end the death penalty, it’s easy to get caught up in a lot of statistics: billions of dollars wasted, hundreds of innocents sentenced to die, scores of lives torn apart. The numbers are powerful reminders of the human cost of the death penalty system. But nothing is quite as powerful as hearing from someone who spent years on death row for a crime he didn’t commit.

That’s why our latest film is about Anthony Ray Hinton, an innocent man who spent thirty years on Alabama’s death row. Anthony’s story is an incredible reminder of the real people whose lives are destroyed by this system. It also provides a glimpse of hope to see how someone can find strength and meaning once their freedom is returned.

Please watch our powerful video  of Anthony Ray Hinton, in his own words. Then, we need your help to get it in front of as many people as possible.

We’re organizing a Thunderclap for next Monday, October 10: World Day Against the Death Penalty. Using Thunderclap, you can help get the video in front of a massive number of people and get them fired up to end the death penalty.

Will you join our movement, and help get this incredible message out?

Stories like Anthony’s help people understand the inherent injustice of the death penalty system. They can even turn opponents into allies. That’s more important now than ever, when people in California, Nebraska, and Oklahoma are voting on the death penalty this election.

Please watch and share this video today, to help strengthen our fight to end the death penalty.

We’re excited to announce the launch of #DeathPenaltyFail – a new collaboration led by Equal Justice USA to promote the facts, highlight the inefficiencies, and push for the repeal of the death penalty in the United States.

The practice of capital punishment has long been fraught with pragmatic, fiscal, and constitutional problems; and is on the decline in the US. Yet the country remains one of the top executing nations in the world.

Using films, visuals, and the stories of exonerees, victim’s families, and law enforcement, we are committed to educating people about the social, emotional, and financial burdens of the death penalty.

#DeathPenaltyFail launches with a series of films – produced by Sundog Pictures – aimed at shedding light on the hard facts surrounding the death penalty, and bringing them to life in a way that feels fresh and compelling without straying into the sensational, and without emotionally manipulating our audience. The issue of the death penalty is complex and layered. No single short film could do justice to the full spectrum of debate and information.

Three short films: an animated comedy, a testimony driven documentary, and a visceral dramatic reconstruction of what actually happens in an execution room.

#DeathPenaltyFail: A Conservative Concern
A Texas-based documentary driven by conservative voices including a former Governor responsible for signing off on the execution of 19 men, a campaigner whose brother was brutally murdered in Nebraska, as well as the latest exonerated man to be freed from Death Row in Texas. A Conservative Concern was also recut into a series of shorts digging into each story.
Directed by Leo Burley, Produced by Rebecca Mounsey
Executive Producer: Sam Anthony

#DeathPenaltyFail: A Really Quick and Occasionally Bloody Look at the Death Penalty
This fast paced animation brings the facts and stats associated with the death penalty to life in a darkly funny and irreverent way.
Co-production with Flickerlab (NYC). Produced by Harold Moss & Rebecca Mounsey.
Executive Producer: Dov Freedman.

#DeathPenaltyFail: A Lethal Injection
A painstaking reconstruction of a real-time execution by lethal injection that highlights some of the very specific issues relating to the US’ preferred execution method. Using CCTV footage, authentic set design and a script based on real life events, the reality of a lethal injection is heightened to uncomfortable levels.
Directed by Bruce Goodison, Produced by Rebecca Mounsey
Executive Producer: Johnny Webb

We hope to inspire activism and interest in the videos and will work towards repeal with individuals across the country who sign-up to join our effort.

#DeathPenaltyFail is a network of organizations that are united in efforts to repeal the Death Penalty:

Sundog Pictures: Responsible for the inception and production of all film and creative content for #DeathPenaltyFail

Flickerlab: New York based animation company responsible for the co-production of “A Really Quick and Occasionally Bloody Look at the Death Penalty”

Virgin Unite USA: Virgin Unite is the entrepreneurial foundation of the Virgin Group and the Branson family. We unite people and entrepreneurial ideas to create opportunities for a better world. In line with our objective to advance human rights where it relates to the persons affected by death penalty, Virgin Unite has collaborated with EJUSA to develop the #DeathPenaltyFail campaign and digital platform, aiming to correct widely held misperceptions about the death penalty and educate the public on the issue.

Equal Justice USA – A non-profit organisation, working state by state and city by city to change the conversation, build bridges across disparate constituencies, and strengthen local campaigns to repeal the death penalty. EJUSA will be the driving force behind #DeathPenaltyFail advocacy strategy, helping our audience find an active role in this movement.

Conservatives Concerned About the Death Penalty – A place where like-minded conservatives can come together and discuss the death penalty issue.

Witness to Innocence – A foundation to support those who have been incarcerated on death row, only later to be found innocent. A number of exonerees will speak at some screenings of the #DeathPenaltyFail videos

Please contact deathpenaltyfail@gmail.com with any questions or press inquiries.

Thank you for getting involved! Check your email to confirm your subscription to our national partners, Equal Justice USA.